While the development of SELF is proceeding steadily, we decided to indulge ourselves in another point-and-click.

This was originally a project I had thought about back in 2011. I had just started grad school and I was entangled with seminars, congresses, study trips across the country and, consequently, I was bound to spend many hours inside buses.

Travelling across Brazil gave me moments of boredom, and those triggered a reaction in me: suddenly I wanted to create something. Scribbling through my notebook, I ended up coming up with an idea for a text adventure game. My drawing skills were still in the process of reawakening, and I had my mind full of ideas from literature because of lectures I had attended previously that year. My mind was overflowing with concepts. I was specially influenced by philosophy, and this inspiration made me want to create a game about memories and thinking process.

What at first were random ideas about a shut-in girl became a game script, roughly written by hand in a notebook.

However, I didn’t have any clue on how to start making an text-game adventure. I tried Twine several times, but I just couldn’t express my ideas with it.

I left this project maturing for almost two years, months after I had properly started making a game. And I thought that my text adventure could actually be transformed into a point-and-click adventure. Rough design of the kitchen, back in 2012

So now I formally announce UNMISTAKABLE, our second point-and-click adventure that we expect to release before SELF is completed. Current design for the kitchen

UNMISTAKABLE will feature different endings, items descriptions and a collection. All the images so far are made using Paper, by 53, a moleskin app for iPad, and we plan to finish the design for this game using this app only. We decided to limit our choices as much as possible to be able to properly focus on the creative process, instead of playing around with tool sets. This TED talk gave us the initial sparkle to reduce our tool sets to a minimum.

You can follow the development of UNMISTAKABLE by checking our devdiaries, or by following us on twitter for more instant updates. 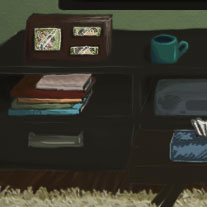